Seeking is also known as Seeking Arrangement. It is the world’s biggest sugar daddy dating app. It was rebranded in 2018 because it was banned by Apple after Donald Trump decided to introduce a new law regarding elimination of prostitution online. The truth is Seeking Arrangement never allows prostitutes to join their app/website. In their official statement, it clearly says that prostitutes are not allowed to join Seeking Arrangement. That’s why Seeking dating app is still available on Google Play Store. But Apple is best characterized by strict rules and regulations (sometimes they are just too strict), so Seeking dating app has been banned from the Apple Store since 2018. After that incident, Brandon Wade, CEO of Seeking Arrangement, has decided to rebrand this sugar daddy dating app; therefore, now it’s called Seeking. Nevertheless, the Apple Store still doesn’t allow Seeking dating app to be available on iTunes. Now we probably can see that iTunes is a bit too much because sugar daddy dating isn’t illegal – it’s about looking for mutually beneficial relationships characterized by honesty – no one needs to lie to anyone. In contrast, most traditional relationships are very stressful because people in traditional relationships can’t be honest with each other and have to manipulate their partners in order to get what they really want. And that’s why most traditional relationships fail, as evidenced by the high divorce rate in this day and age (and many couples didn’t get married in the first place &they break up, so they are not even in the statistics). By the way, those who are not divorced are generally unhappily married, according to divorce lawyers in New York City who claim that the success rate of marriage is only 20%. Yet unfortunately, all sugar daddy dating apps have been banned from the Apple Store since 2018. That being said, you can still access Seeking dating app on Google Play Store or via its website Seeking.com, so this shouldn’t affect members’ satisfaction.

Because all sugar daddy dating apps and wealthy dating apps are removed by the Apple Store, Luxy was the only luxury dating app that was available on iTunes. Hence, it was extremely successful for quite a while – this luxury dating app didn’t have a competitor on iTunes for a long time – users can only download this app and find elite matches from the Apple Store. Nonetheless, due to the strict rules and regulations on iTunes, Luxy was also removed by Apple in 2019. Thus, for a period of time, no luxury dating app was available on Apple Store. But Luxy has another dating app called Luxy Pro which is still available on iTunes. In other words, Luxy understands line extension! Now Luxy Pro is incredibly popular on Apple Store as it doesn’t have any competition nowadays. Please note that Luxy Pro isn’t about looking for arrangements/sugar daddies/sugar babies. Yet only its users can define what they are actually looking for. 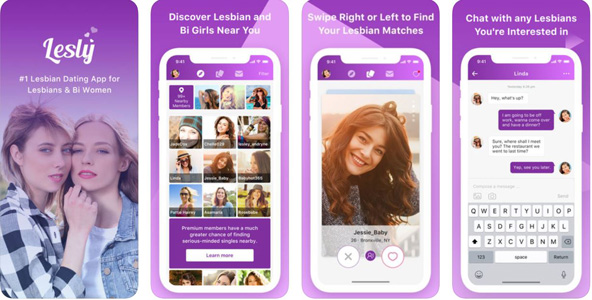 Lesly is a very popular lesbian dating app which is still available on Google Play Store. However, it has been banned from the Apple Store. Now you are wondering why iTunes doesn’t like lesbian dating. Well, actually, Lesly was developed by an experienced team that launched a variety of dating apps; as a consequence, the Apple Store could see these dating apps came from the same IP address & Apple doesn’t like that. In fact, those dating apps from the same team were all for different dating niches (e.g. lesbian dating, gay dating, mainstream dating, etc.); thus, there is nothing wrong with that. But Apple can be quite mean sometimes. Banning Lesly is very unfair because lesbian and bisexual women have the right to meet each other online. Also, Apple didn’t ban 200 radio apps launched by the same IP address, so that’s not fair.

Miss Travel is a travel dating app for the rich to meet the beautiful. It was also created by Brandon Wade, CEO of Seeking Arrangement. Apparently, almost all of Brandon Wade’s dating apps have been removed by the Apple Store because his dating apps are mostly about helping rich men to meet hot women & iTunes doesn’t allow any kind of wealthy dating app these days. Miss Travel’s business model is to help pretty women to travel with wealthy men for free. That is to say, those trips are paid by rich guys who want companion while they are travelling the world. Anyway, people who are interested in this type of dating can still use Miss Travel’s official website and find what they want. Note that Miss Travel is not for those who are looking for long-term relationships or arrangements because most relationships here are short-term flings which only last during those exotic trips. Nonetheless, it’s up to the individual when it comes to whether they want to make a relationship last or not.

WhatsYourPrice dating app is also a dating product developed by Brandon Wade, CEO of Seeking Arrangement. This dating app is about helping beautiful women to get paid while going out on dates with rich men. Because most women are used by poor and greedy men these days, Brandon Wade has created this dating app for switched-on women to get paid when they date wealthy and generous men – women’s time is valued by men on this app& ladies don’t necessarily sleep with men on these dates because they can make their own decisions. Sadly, the Apple Store doesn’t like this idea and this app has been removed by iTunes as well. But that’s not fair at all because iTunes is basically saying if you are not looking for a traditional relationship, your belief system is wrong – that’s very judgmental. Obviously, freedom of speech is not allowed in this case. Fortunately, people can still join WhatsYourPrice’s official website and find interesting dates there.

What do relationship experts say?

“I like Brandon Wade’s dating apps because I think he is a genius. Many of my friends who are entrepreneurs have told me that they believe Brandon Wade is an outstanding businessman, because he really understands how to help people in the most important ways, i.e. introducing attractive women to successful men so that people can get what they desire in an honest way without playing games. I like this honesty.” (Jade Seashell)

“There is nothing wrong with luxury dating apps because every type of value system should have its place in this world, as long as it’s legal (believing in luxury dating is legal). If someone believes in wealthy dating, we shouldn’t blame them because that’s their choice.” (Curt Coch)

“The Internet should respect free speech, so sugar daddy dating shouldn’t be banned from the Apple Store. The most famous Hollywood movie Breakfast at Tiffany’s is about sugar dating as well – Paul Varjak is a male sugar baby. So, if iTunes bans all sugar daddy dating apps in 2019, why didn’t Hollywood ban Breakfast at Tiffany’s in 1961? That’s not very progressive at all.” (Serghei)

“Love doesn’t exist. Love is a concept invented by the poor.” (Brandon Wade on CNN)

You can disagree with others’ opinions, but other people can still have their own opinions. We agree to disagree.

Michael B. Wilson Feb 27, 2020 0
Breakups are very painful, and everyone has had at least one bad breakup in their life. But that is not the end of…
Seniors